Yesterday was Google’s big announcement and press conference about the Google ChromeOS. Apparently my invite to the press conference must have been lost in the mail, so I had to settle for reading TechCrunch and their post Live From Google’s Chrome OS Event. What is ChromeOS all about? Well Google made this video to try and explain it.

While that is all nice and good, I was happy to see this next post from TechCrunch on how to try out Google Chrome OS. As it happens I already had Virtualbox installed so it was a simple process to download the Chrome OS virtual machine torrent that TechCrunch mentioned. Once I was done downloading the torrent it took me about 10 minutes to get the Chrome OS virtual machine up and running.

There were a couple of tweaks that I had to do to make it run. The TechCrunch article talked about using Ubuntu as the OS when you setup the virtual machine. I could not get it to boot using that setting. Simply changing the OS setting in Virtualbox to Linux – Other got the OS to boot and start up. I also had to tweak the network settings on the virtual machine. Chrome OS is pretty useless with out a network connection, since it logs in using a Google Account. I simply set the network setting in the virtual machine to NAT. It defaulted to bridged when it was created and it would not connect. Once switched to NAT the OS was able to connect to the network and allow me to login.

Here is a screencast I took of the Chrome OS booting up in Virtualbox. It is not the fastest OS on the planet yet, and of course it only boots into Google Chrome. I used a temporary Google Account to test it out just in case there was any malicious code in there wanting to snoop my Google Account login. In fact that account and login are already deleted.

Google is keeping Chrome OS simple. It’s focus is web applications, like GMail, Docs, Reader etc. It is not going to replace your Windows, Mac or Linux desktop right now. As Mark Poppen pointed out in a tweet there are many applications that people use that do not have web application equivalents, yet. While Photoshop web applications are still coming along, and some are getting better like Aviary, the web versions still no not provide the experience that people need. 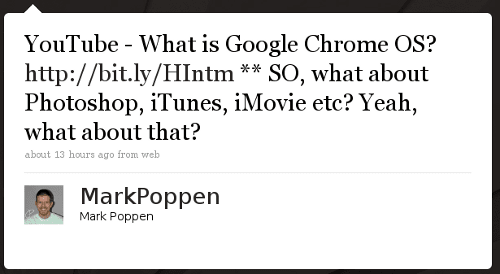 Chrome OS will not be replacing your desktop anytime soon, but if you have a Netbook and need quick access to your email, reader and other web applications Chrome OS could be the OS of choice for you soon. There are still a lot of questions about the OS and time will tell how the new Google Chrome OS works in the real world, not just Google’s pie in the sky world.

← What is My IP Address
Htaccess Tools →

2 Responses to Booting ChromeOS in Virtualbox