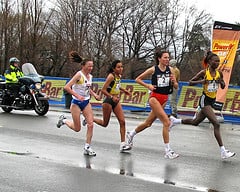 Well it has officially been more than a week since Rhett or I have posted on Epiblogger. Not that we have not intended to post. There are several posts from both Rhett and I sitting in the drafts folder in various states of completion. Epiblogger opened on January 1st, 2008 and after five months I think both Rhett and I have hit the “blogging wall”. The blogging wall is similar to the wall that marathon runners experience.

The Wall is a legendary thing. Usually encountered around mile 20, it’s the point where the flesh weakens, the spirit sags and the will drains away into a little puddle on the ground. Legs turn to melting Jell-O and breath comes in short, gasping gulps. In all of sports, there is probably nothing as feared, or misunderstood, as this inner barrier where the unprepared run out of steam and can go no further.
From: Breaking through the wall – marathon running techniques

While I am not a runner by an stretch of the imagination, the blogging wall is as real as the wall that marathon runners experience. Bloggers put great amounts of energy into writing and creating posts week after week, day after day and at some point the energy just seems to dry up. It is at this point that many bloggers will stop posting on their blogs altogether. They seem to disappear off of the blogosphere, and sometimes even the Internet.

I could make a long list of things that you as a blogger could do to make it through the blogging wall, but there is only one thing you need to do. Just keep going! Keep writing, keep posting, keep participating in the community that you have started and in the blogging communities that you are a part of. To quote Dory from Finding Nemo:

What helps you as a blogger to keep going when you have hit the “blogging wall”?

5 Responses to The Blogging Wall