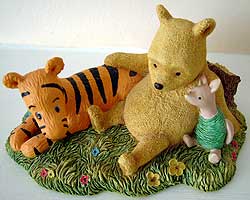 Winnie the Pooh
Winnie the Pooh’s blog would be the kind of blog that would say a lot but never really say anything. You might read each post a hundred times to find the hidden meaning in it. There would be some wisdom in every post but in order to understand it you would always have to look through what is being said.

Piglet
Piglet is a nice guy, he is just not very sure of himself. His blog would reflect that. Every post would have some form of self doubt and lack confidence. Piglet would never want to offend anyone and in trying to please everyone would not take a stand on much.

Tigger
Tigger’s blog would never say much of anything, but would say it a lot. Actually Tigger would probably not have a blog, but would be the one most likely to use Twitter. 140 characters is all he would ever need and he could post all the time.

Rabbit
Rabbit’s blog would be the bossiest of the group. He is the ultimate authority on everything and he would make sure the world would know what his opinion is. He might not always be right, but he would be quite certain about himself.

Eeyore
Eeyor’s blog would be depressing to read plain and simple. He would have no subscribers and quit after a week or two because no one was reading.

There is a little part of the characters from Winnie the Pooh in each of us. Some days we are bossy and blog like Rabbit, other days we might blog more like Piglet and some days we would have everything together and have posts just like Christopher Robin. This is what makes each blog unique, none of us are the same and we all perceive and understand things differently. Without this uniqueness and authenticity our blogs might go from being cool to selling cool.

What kind of blogger am I? I would like to say I am a Christopher Robin type of blogger, but that would be a lie. I have to admit I am most likely a Rabbit blogger. I have an opinion on almost everything and if people just did as I said on the Internet the whole place would be better off.

What Winnie the Pooh character do you blog like the most?